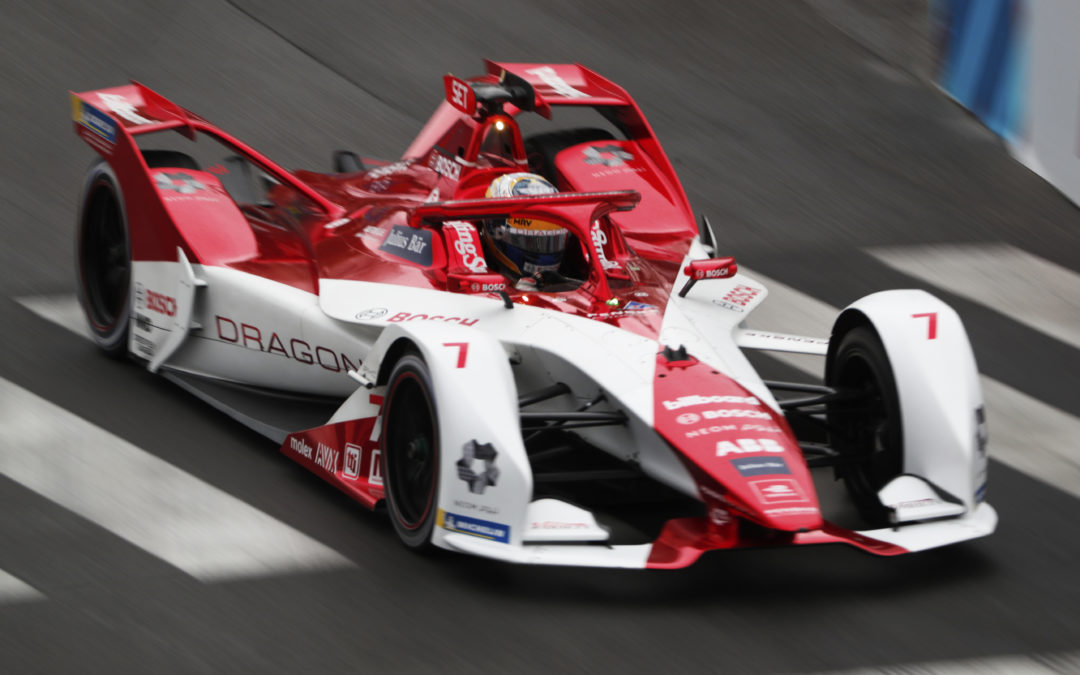 The second double round of the FE World Championship ended this Sunday, the 11th, with the disputes of the fourth stage of the 2021 season. Competing with the # 7 car of the Dragon Penske Autosport team, the Brazilian Sérgio Sette Câmara had a complicated weekend and, even with a fast car, he was unable to score points in either race.

Following the intense schedule of Formula E weekends, the Italian round of the World Championship started on Friday, with the track-walk and shakedown activities. On Saturday morning, the 24 cars went on the track for the two free practice sessions that drivers and teams had to adjust the cars. Sérgio, even though he had never been on the track, showed that he did a good job in the team’s simulator and in the first practice he recorded the fourth best time with the 1´39s044 mark. In the second free practice session, testing a different setup for his car, Sette Câmara was 13th with 1m41s978. A few minutes later, the qualifying session was authorized and, in a risky strategy, the Dragon Penske Autosport team sent their two drivers to the track without even a tyre warm-up lap. With that, without the ideal conditions to extract the 250 kW from his car, Sérgio did not get a good place. With the 1m39s943 mark he secured only 16th place for the race in the third stage.

Between the qualifying session and the start of the first race it rained in the Italian capital and, with the wet track, the race started with a safety car. Sette Câmara, coming from the middle of the pack, remained in his initial position in the first laps and then began to impose a strong pace seeking recovery. With 15 minutes of race the driver was already in 12th place when, suddenly, his car stopped in the middle of the track being overtaken by several opponents. Moments later Sette managed to get # 7 car back to work and, with that, returned to the dispute. On the next lap, however, the race director applied a drive-through penalty to the Brazilian for excess energy consumption. Thus, without the slightest chance of seeking more positions, Sette sought only to finish the race where he received the flag in 15th position. The victory went to the experienced Jean Eric Vergne (FRA), Sam Bird (ING) in second and Mitch Evans (NZE) in third.

“I was very frustrated with the problem that happened in the race. Our car was fast since the first free practice and, even after the qualifying strategy error, we had a good chance of recovery in the race. Unfortunately, due to the numerous bumps on the track, where cars would sometimes leave the ground, my car had a power surge and then went out completely. After a few seconds I managed to start it again and went back to the race, but the peak energy cost me the penalty. A pity, ”explained the 22-year-old Brazilian.

With head held high and a new stage of the Championship ahead, Sunday started well for Sette Câmara. In the only free practice session of the stage, the Brazilian showed good speed again, taking the fourth time when setting the time of 1´40´808. The qualifying session was two hours later, however, between sessions it rained a lot on the Italian track. Sérgio went to the track in the second group of six drivers, with the track still wet, but without rain. In the search for the limit of his car, the driver came with the best mark of the 12 cars so far, however, a light touch on one of the walls damaged his car and, with that, he was unable to record his time and had to start from the end of the group.

With the track still wet, the race had its start authorized with a safety car at eight in the morning, Brasília time. Serginho, as he would start at the end of the group, decided with his engineers to opt for a strategy to save energy at the beginning of the race. With that, he ended up being a bit behind in the hopes of a safety car. Unfortunately the safety car entered, however, it only left the track one lap to the end, leaving little time for the Brazilian to recover. Sette showed that his car had a good pace and, taking advantage of several incidents ahead of him, he finished the race in 12th position. Stofel Vandoorne (BEL) won the race followed by Alexander Sims (ING) and Pascal Wehrlein (ALE).

The fifth and sixth stages of the Championship will take place in two weeks in a new city. The disputes will take place at the Autódromo Ricardo Tormo, in Valencia – Spain, on the 24th and 25th of April. In the classification table, after the disputes in Rome, Sette Câmara continues with 12 points, now in the 14th position.

“Certainly, the learning we bring here from Italy will be very great. The car presented problems yesterday, we made mistakes in the qualifying strategy yesterday and today, during the race, we bet on a situation that turned out to be inefficient. What makes me happy, at least, is that the car, again, showed that it has a good pace and, in normal situations we have a real chance to fight to be in the Top 6 of Valencia, just as we did in the pre-season ”, concludes the driver.